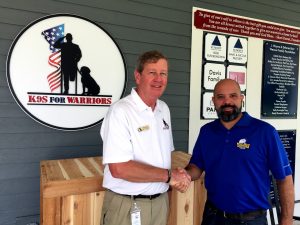 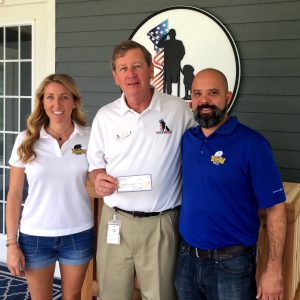 Jacksonville Beach, Florida – Howler Monkey Sauce, a Florida hot sauce manufacturer and proponent of military causes, is giving back to the community with a donation of 20% of their July 2017 profits to K9s For Warriors.
Howler Monkey Sauce started small by sending care packages of their hot sauce to friends currently serving active duty overseas. When a friend said he missed the “taste of home”, Co-Founder Conan Herring was much obliged to send a few bottles of Howler Monkey Sauce to brighten his buddy’s day.

“It started as a personal gift,” Conan recalls, “Then I received a sincere thank you e-mail from Captain Allen Hill in Afghanistan. He told me how mealtime was the highlight of their days, and he was so grateful that our sauce gave him a break from the monotonous mess hall food. Our sauce. I was so humbled that something as simple as a hot sauce could make a soldier’s day.”

“We continued by asking friends to send any active duty military who would want a package our way, and now it’s just part of our shipping plan.” Tom Ellis, co-founder of Howler Monkey Sauce continues, “From there, we wanted to contribute to a great cause close to home. Our Marketing Director is a Veteran, and she volunteered at K9s For Warriors while on Active Duty. We’ve seen the big things they do for our military heroes and rescue dogs, and we wanted to do whatever we could to help them continue.”

“The unfortunate, staggering fact is, every day, at least 20 veterans returning from combat take their own lives,” said Rory Diamond, Executive Director, at K9s For Warriors. “The K9s for Warriors training program not only provides our soldiers with a live-saving gift, but it’s also an opportunity for peer to peer support with other servicemen and women who suffer from similar issues.”

Howler Monkey Sauce strives to provide a distinctly flavorful, all-natural hot sauce free of any thickeners, preservatives, added sugars, Xanthan Gum, Sodium Benzoate, and MSG. We are owned and operated in Jacksonville Beach, Florida, and source all ingredients fresh from Florida. We believe that creating delicious sauce isn’t enough- giving back to the community is part of our mission.

About K9s For Warriors

Founded in 2011, K9s For Warriors is dedicated to providing service canines to warriors suffering from post-traumatic stress, traumatic brain injury, and/or military sexual trauma as a result of military service post 9/11. Our goal is to give a new leash on life to rescue dogs and military heroes, empowering warriors to return to civilian life with dignity and independence.
For more information, visit http://www.k9sforwarriors.org.
###